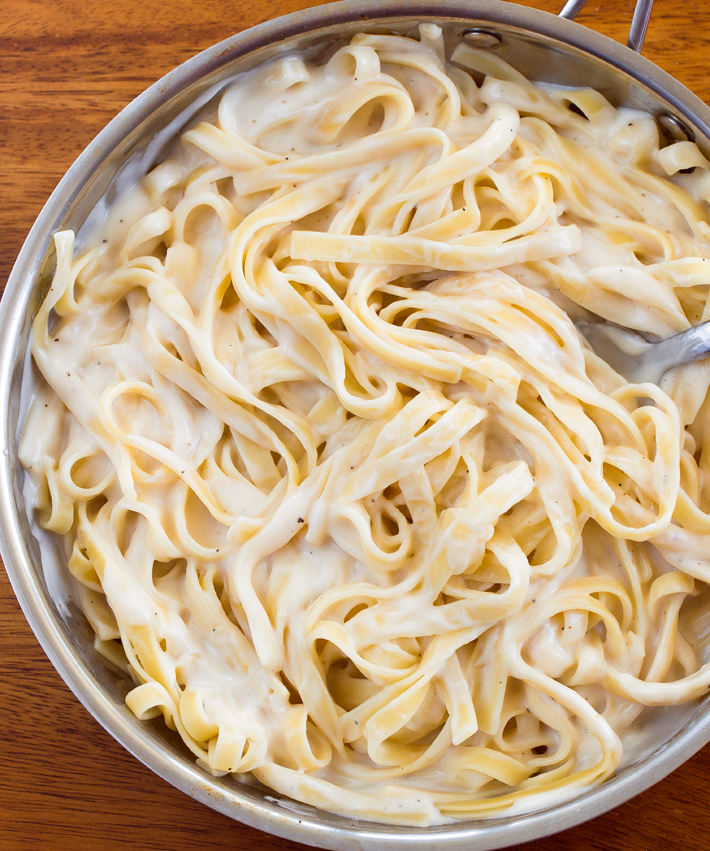 This is the best creamy vegan Alfredo sauce recipe you’ll ever find, and it’s easy to make at home with no dairy, no eggs, and no cashews required!

Imagine a classic vegan Alfredo recipe so luxuriously rich and smooth, you’ll want to pour it over absolutely everything.

I’ve served the recipe to both vegetarians and omnivores, always with rave reviews and expressions of complete disbelief that something this deliciously creamy could possibly be made without any heavy cream at all.

Also be sure to try this Vegan Cheesecake

No tofu or soy

It’s perfect for serving over your favorite pasta, such as fettuccine, linguine, tortellini, spaghetti, rigatoni, penne, rotini, macaroni, or ravioli.

Or if you want to try something other than pastas, the dairy free Alfredo is also great with broccoli or roasted vegetables, gnocchi, rice, stuffed shells, lasagna, low carb zucchini noodles (zoodles), baked potatoes, or spaghetti squash (see How to cook spaghetti squash).

You can even use it as a vegan white sauce for an Alfredo-style Vegan Pizza!

I’ve also included my cauliflower Alfredo recipe below, or if you’re looking for a homemade Alfredo sauce with cashews, try this Creamy Vegan Garlic Pasta.

Milk of choice: Feel free to use whatever milk you have on hand. I recommend choosing an unsweetened variety, such as almond milk or soy milk, or it’s especially rich and creamy if you use nondairy creamer or canned coconut milk.

For garlic Alfredo: Add 2-3 tsp minced garlic to the saucepan at the same time as the salt, before bringing the mixture to a boil.

For the cheese: The recipe works with either Parmesan cheese (such as dairy free Violife or Follow Your Heart) or nutritional yeast. The two ingredients have different flavors but are both good here in their own right.

Or you can sub your favorite shredded vegan cheddar, pepper jack, or mozzarella cheese. Add this in at the very end when you turn off the heat, then stir until it melts.

Oil free Alfredo: While the recipe below does call for oil or butter (try Earth Balance or Miyokos vegan butter, or Smart Balance Light for low calorie Alfredo sauce), I substituted an equal amount of tahini once with great results.

Add-ins: Make it a meal by throwing in a handful of spinach or kale, some roasted mushrooms, peas, vegan bacon (for carbonara), or a protein like baked tofu or tempeh.

This vegan pasta sauce is super quick and easy to make, but if you’re looking for something even easier, then there are a bunch of boxed or jarred Alfredo brands on the market, including Primal Kitchen, Daiya Cheeze Sauce, Victoria Vegan, and Simple Truth Plant Based Alfredo.

How to make vegan alfredo pasta

To make the recipe, start by gathering all of your ingredients.

In a saucepan, whisk the cornstarch into the milk or creamer until it’s completely dissolved, with no lumps.

Over low-medium heat, slowly bring this mixture to a boil. Stir occasionally at first, then constantly once it begins to thicken. The whole process should take under 10 minutes.

Once thick, turn off the heat and whisk in the nutritional yeast or vegan Parmesan until it melts. Taste the sauce, and season with salt and pepper as desired.

Above, watch the Alfredo recipe video

(Or these Cauliflower Tacos)